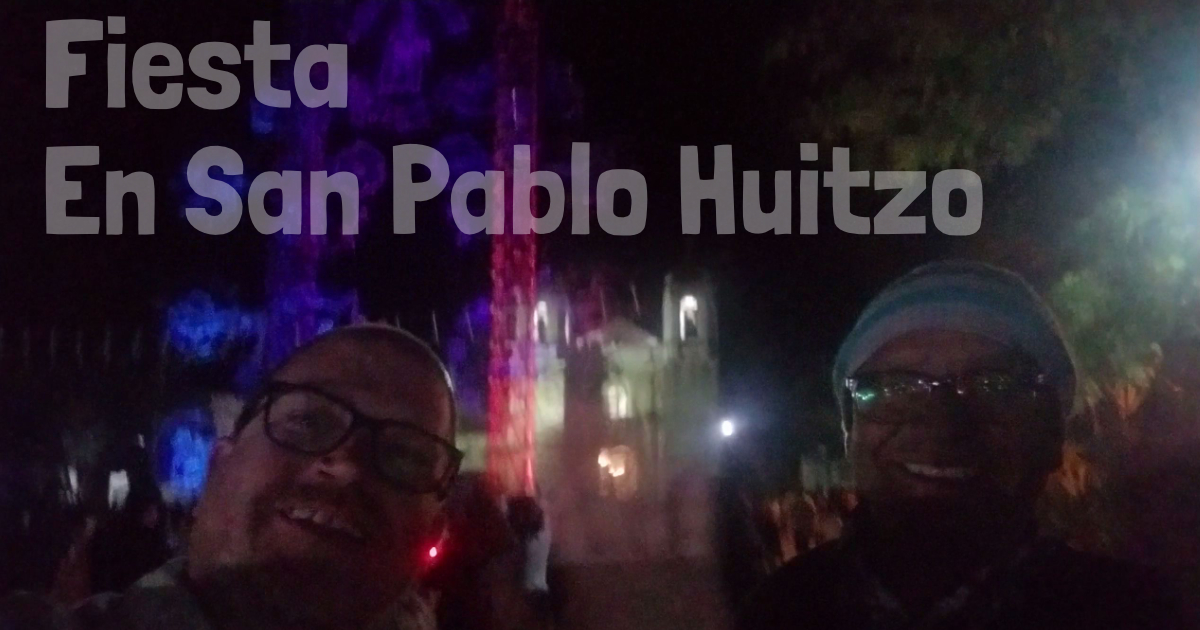 Saturday, my friend, Jose took me to the small village of San Pablo Huitzo for the celebration of Huitzo’s patron saint, Pablo (Paul)

I visited San Pablo 3 yearso ago, to learn about the Universidad de la tierra (University of the earth). It is a great program. It alone is worth visiting the little village.

At the fiesta, we visited a fair with organic produce, livestock, handicrafts, textiles and a demonstration of a solar powered water pump.

Like most Mexican villages, in the center of town, there is a church and city building. Between the two was an elaborate structure. It is a firework display that a team of people spent months to build and plan…all for the big event of the fiesta.

The structure was not just covered with fireworks and moving parts, but also with lights, which illuminated the night, as we waited for the firework display.

After much bell ringing from the church, the priest started leading the congregation through singing vespers. Not far from the church is the city hall, where a rowdy group of young people played loud, toe tapping secular music, while people danced.

Jose and I were standing between the church and city hall. Some of the older people were complaining because the ‘barrachos (drunks)’ were making too much noise and racket…they couldn’t hear the music coming from the church.

I thought it was perfect symbolism. Paul is one of my favorite saints, because he had a dramatic change in his life…so much that he changed his name (he was originally called Saul—back when he was bad). I thought the barrachos dancing in the streets symbolized the life of ‘Saul’…the devoted people in the church represented ‘Paul’

I tried to take some photos of the firework display. In my opinion, photos of fireworks are never as good as enjoying them in real life. I put my camera in my pocket, and enjoyed the beautiful display. It was one of the most expressive firework displays that I have ever seen!

Shortly after the fiesta, I experienced a radical change that changed the way I think about things (not as dramatic as Paul’s conversion…but big enough for me). I thought San Pablo must have been watching over me.

Thanks Jose and San Pablo Huitzo for the wonderful experience!

In Mexico, the simple things in life are big adventures. I spent the morning looking for the village cobbler (shoe repair). the first one I visited, could only sew tennis shoes, so he told me to go to the next street, where there is another cobbler, who can sew leather shoes…i was a little disoriented because I didn’t consider the dusty alley he was talking about a street, but eventually found the other cobbler–even though there was no sign.

I had to ask people in the street. it turns out, you go through a gate, into what looks like a residence and there is a window where you can tell a woman what you want done, and leave your shoes.

she is going to restitch the seams in my shoes, give them a fresh stain, and new insole. they will be ready on Friday and will cost approx. $3 USD. the last time I went to a shoe repair in cincinnati, the repair was twice as expensive as the shoes!!! one of the many things I admire about Mexican culture is the way they repair and reuse things… in the USA, consumerism rules, and it’s designed to be easier to buy another than repair when something is broken.

FYI. Here in Mexico, they also have people who do TV repair

I  can’t take good photos of the moon…some things just have to be experienced, not necessarily captured in a photo…i did want to share the beautiful view of the moon rising over the valley in Soledad Etla. It was breathtaking. It’s going to be a perfect night for watching the #eclipse.

I love to visit the cities, but I also enjoy the small towns and countryside. Here are a few photos from my morning walks in Soledad, Etla, Mexico.

the people of Oaxaca enjoy a snack, called chaupalines (grasshoppers). they are roasted with chili and lime. over the 5 years of visiting Mexico, I have not been able to aquire a taste for them; until now.

something switched with my taste buds, and now they are so delicious, I could eat a whole bag of them (like popcorn)!

it just goes to show that people change, and don’t be afraid to try something again…even when it didn’t work for you the first tries.

Breakfast in my neighborhood’s cocina…mexican eggs, black beans and hand made tortillas (corn, of course)…a little different from the pop tarts I am used to eating for breakfast.

I love how the old fashioned ways of cooking still live in soledad etla. these men bring the wood for cooking to the kitchen. 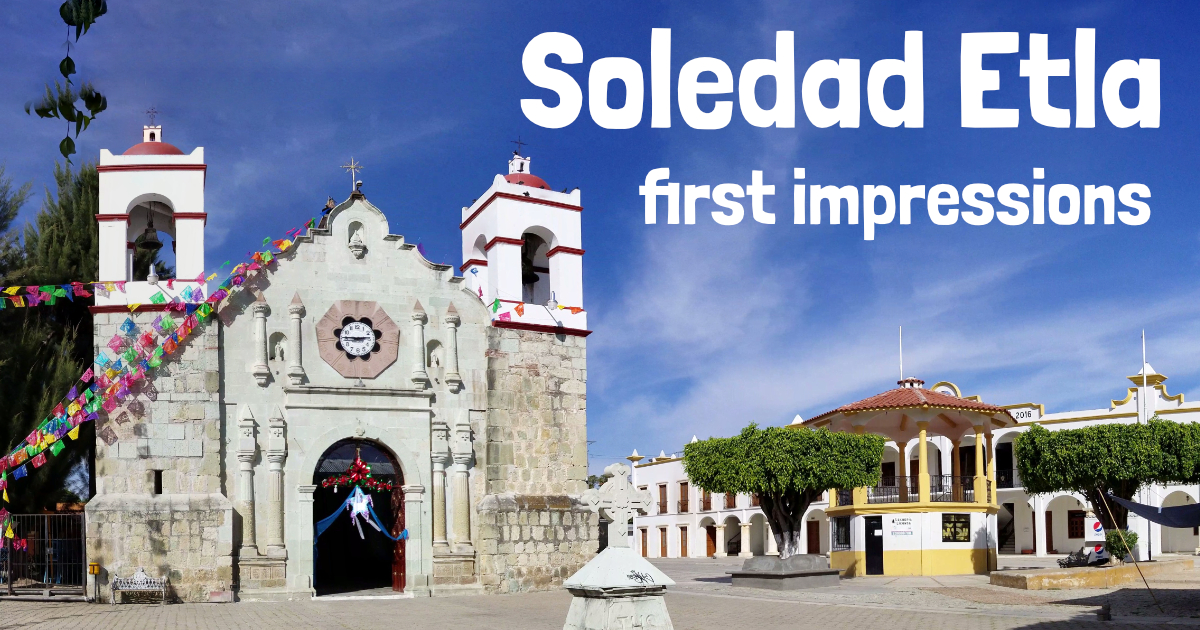 My friend Leticia Gomez-Salinas is a Spanish teacher, who lives in Soledad Etla, a small village north of Oaxaca. She offers her students a unique opporunity to live with her family, in her village.

This is going to be a different experience, because her village does not have as many english speakers visiting from all over the world (compared to the capital city, Oaxaca) So I find myself using Spanish more often.

It’s also a small town, which has a different dynamic than a bigger city. As an artist, i love the art in a big city, but prefer the relaxed and tranquil small town life (i’m the same way in Kentucky)

Here’s a short video I made with my first impressions of Soledad Etla. There will be more to follow! Enjoy!

on my way to Oaxaca, I spent half a day in Mexico city. this place has a Lot going on, and I was road weary from traveling but made this short video (and a few sketches) to share with you all.

Travel Update: I’m still in. cdmx, waiting for.my bus to Oaxaca. I have noticed that a lot of USA people warn me to “not drink the water” when I tell them I’m going to visit Mexico. I always let them know that I love Mexican water.

this brand of naturally occuring carbonated water comes from a spring in Mexico. and is one of the most delicious waters I have ever had… plain or with the salt and lime. I have already had 2 liters, and I feel better than ever! so my advice if you ever visit Mexico is: drink the water!

Ken is a self-taught artist from rural Kentucky, whose work includes painting, printmaking, and pottery. He considers himself to be a 'lifetime learner' and uses art as the vehicle to explore and learn more about the world around him. Much of his work reflect his optimistic views on rural folk culture, river life and simple pleasures.

You can visit Ken every Final Friday of the month at studio 400 at the Pendleton Art Center in downtown Cincinnati or by appointment.