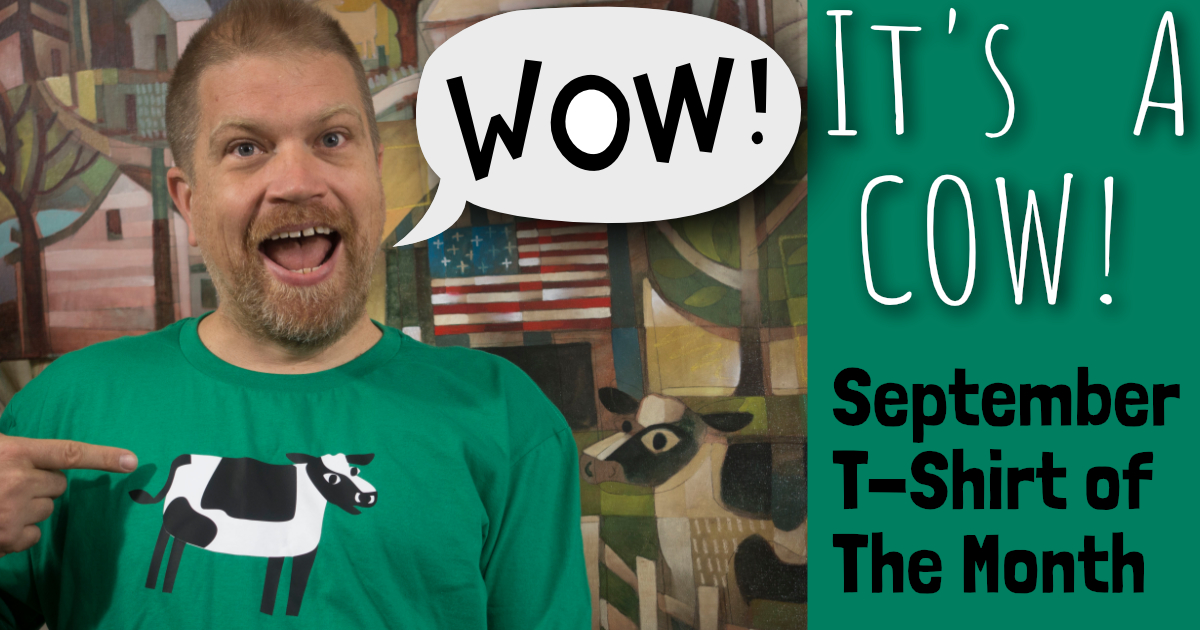 It’s a new month, and A new design for my ‘T-Shirt of the Month” project.

I’m pleased to introduce to you-“Wow! It’s A Cow!”

Its always exciting to see my artwork in other people’s homes. It’s the last part of the painting process, and I don’t always get to see it.

So you can imagine how excited I was- to see my art work show up on Sweet Tea For You’s Instagram feed as part of a design for a client.

Thank You, Renea, for including my work in your work!
Not only do I love Renea’s style, but she is one of those, community minded, creative people who live in the Ohio River Valley Neighborhood (Ripley, Oh), and I am glad we are neighbors. If you like interior design, or Ripley, Ohio, visit her facebook page at- https://www.facebook.com/pg/Sweet-Tea-For-You-492279924266987 , and give her page a ‘like’.

I’m watching the eclipse from my studio. The view looks like this:

Yes, it’s finished (even framed), Oil on Canvas – 20×24″ –I wasn’t going to show it off until this Final Friday at the Pendleton Art Center, BUT in honor of the eclipse, i’m showing it off today.

As of this moment, the original is available, prints too. Click the image below for more details. Enjoy the eclipse, everyone!

The hotel website, Oyster.com, recently published an article titled, “The Best Small Towns in America“, and guess who was number 4? Maysville, KY!!!

I’m really not that surprised. It is beautiful out here. We are on the Ohio river and there are a lot of our downtown’s old time architecture is still in place. The neighborhood where I live, Old Washington, is one of Kentucky’s first settlements.

The community is VERY supportive of the arts. Our local government,  groups and private individuals have all created and supported programs, organizations and incentives to make our area a vibrant place to live for everyone.

I don’t have family connections (like many of the residents) in Maysville, but I chose to live in this small town for the above reasons.

A small town fits my personality, and is a great place to work. There is inspiration direction I look.  To celebrate our recent acknowledgement, for a limited time, I created a gallery on my website featuring some of the paintings I created with Maysville as the subject. So until you can make a trip out to visit Maysville in person, click the image above for a virtual visit through paintings.

The other day, I met my friends, Bonita Parsons and Misty Skaggs in Morehead, KY to do some printmaking.  They are both talented artists and writers, and from the mountainy part of Kentucky. They didn’t have any experience with block printmaking, so I packed my press, we met at a park, and did some carving.

For my subject, I thought it would be cool to make a print about artists making prints.

I’m still learning how to pack my art art studio for the road. Everything went well, until it was time to put ink on our paper/shirts.

I forgot to bring a brayer! I’m pretty good at improvising, but I don’t have any idea how to do printmaking without a brayer.

I feel bad that my friends didn’t get to print their carvings, but I hate to waste the ink that was already out of the can…so when I got home, I went ahead and made my print.

I’m actually glad that I forgot the brayer, because artist, Corbin Fouts (from Prestonburg, KY) wasn’t able to join us, and she is interested in learning block printing.  We are going to meet again, this Wednesday (August 16 at 11am–weather permitting) at Archer Park in Prestonburg. You all are welcome to join us and watch…or make a print! I’m going to have enough ink, THE BRAYER, press, and some linoleum to share, i have paper–bring a blank shirt if you want to print on t – shirts.

Here is my finished block print. It’s 4 1/2″x6″ on an 8×10 sheet of paper. If you would like to have one for your collection, you can click the artwork to visit my website’s printmaking gallery. I’m selling them for $20 (and ship free to USA).  I don’t charge anyone to participate in the kind of activity we did in Morehead or Prestonburg. When you collect my art, not only do you get a beautiful work of art to enjoy, but you are helping keep ink on my palette, and gas in my car, so I can continue projects like this. Thank you all for your support!

Saturday, I met the Central Kentucky Art Guild in Elizabethtown, KY for a printmaking workshop.

using my rusty/trusty press to make block prints with Debbye Hassell on T-shirt.

artist, Paula Haynes, proofing a print she will feature next month at the Clarkson Honeyfest.

Thank you Dawn Kincaid, for the photos and introducing me to your art guild. I enjoyed meeting everyone and making art together!

One of my few regrets after spending time in Mexico was that I gave up my 4th floor studio at The Pendleton Art Center in downtown Cincinnati. When I got home, I rented a nice space on the 6th floor, but it wasn’t the same. There is no place like home. After waiting more than a year, I am excited to announce that I have moved back to my original studio on the 4th floor! As always, we have a big open house on the final friday of every month (August 25th) from 6-10pm. If you like art, it’s one of my favorite things to do. The facility houses over 200 artists, so there is a lot of inspiring art in one place. I’d love to see you and show off my latest work.

I finished a new oil painting this week. It’s called, “Watching the clouds”, and is a reminder for me to take time to enjoy the simple pleasures of life.
You can click the picture to see it in my online gallery, or see it in person tomorrow, Friday 26 May at the Pendleton Art center in downtown Cincinnati.

I don’t participate in a lot of outdoor art shows, but whenever I can, I go to Covington’s sculpture park along the Ohio river for the Duveneck Art Show. It’s usually the day before Mother’s Day.  The people who organize the show are community minded, and love artists. They even treat the artists to a garden party after the show!  How can I resist?

This year, I tried something different: I used Facebook’s ‘Live Video’, to let my friends see what was going on at the show. Because it was live, the video is completely unedited, and un scripted. I had stage fright at first, but it was fun, and it has given me some ideas for future live projects that I can do in my studio. A copy of the video is still on my  facebook profile, so you can click the link below to see how it went.

I won the Duveneck Award! I was really excited about that because the art becomes a part of the Kenton County Public Library’s collection, and is exhibited in one of their libraries. This show and award is in it’s 48th year.  The Duveneck show art collection has never been displayed as a group…until June 4th. The Behringer-Crawford museum is going to have an exhibit of all 48 Duveneck Art Award winners. I’m thrilled to be a part of it!

The winning piece was an ipad drawing of the view from my studio at the Pendleton Art Center. I think it’s interesting because it contrasts downtown Cincinnati’s old historic architecture, with it’s newer towers in the background.

I also won ‘Best in Show’ for my overall body of work. I was embarassed, because it isn’t common for the same artist to win two big awards at the same show. My work isn’t easy to catagorize, and that can be an advantage or penalty, depending on how traditional the judge is. Thank you, thank you, thank you, for the recognition (and prize/rent money!)

It was the ‘day of Ken’, because in addition to the two awards, I also won the ‘People’s Choice’ award. Guests at the show were invited to vote for their favorite artist…and it was me and my work! I am thrilled to know that my work is reaching and inspiring others.

Outdoor shows are a lot of work, but it feels more like a day of hanging out with friends-in contrast to a ‘day in the office’…especially when it’s the Duveneck Art Show. Thanks again to everyone who worked hard to make it happen!

I am only doing one more outdoor show this season… it’s Art In The Garden, in Augusta, KY on June 3rd. Don’t miss the fun, I hope to see you then!

Earlier this year, I was invited to exhibit some of my work at the Children’s Theater Of Cincinnati. Most of my experience with theater has been from the audience. While visiting their facility, I discovered just how many different creative disciplines work as a team to make the theater happen. Rather than just exhibit work that I have already created, I was inspired to start a new series of oil paintings which celebrate the different people ‘behind the scenes’ in theater.  This weekend, they unveiled the first two paintings of the project during their spring fundraising gala.  These depict the cosutme designers and the set designers.

I’m interested in celebrating all forms of creative expression, and theater is unique because it combines so many into one work. I’m grateful to the Children’s Theater Of Cincinnati for the opportunity, and also the Maysville Players – Mike Thomas and Mark Funk, in particular…who are an encyclopedia of knowledge about theater, and have been a great resource for my research. They manage Maysville’s Theater -an AMAZING program, especially considering the size of our rural community.

I’m thrilled with how the series of paintings are developing – (choreography, music and makeup are next), but I’m even more excited how the project gave me a chance to learn about the local theater in my community. I love what they are doing, and want to encourage you all to support your local theater the next time they have a performance…not only is it entertaining, but it’s supporting a wide range of arts.

Category: Painting
Subcribe to my email newsletter
For occasional special updates and news about my art projects. 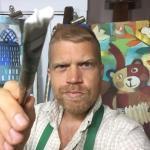 Before the pandemic, You could visit Ken every Final Friday of the month at studio 400 at the Pendleton Art Center in downtown Cincinnati. Now, he's mostly sitting on his front porch ,keeping a social distance, in the Historic Village of Old Washington, KY.