I woke at dawn, ate two bananas, and broke camp. I was seven miles from Rising Sun, IN.

Entering the town, I passed a picturesque field of cows with a red barn. The morning seemed full of possibilities. Rising Sun is building a reputation as an art colony on the Ohio River. It’s economy has been primed by the arrival of a casino boat, and the opening of the Pendelton Art Center. Now with a handful of galleries and studios, it is becoming a destination for the art enthusiast. 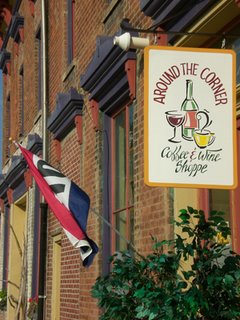 I had breakfast at Around The Corner-coffee and wine shop, where I met owner and artist, Lynn Englar. She offers wines from Indiana wineries and is part of the Indiana Wine Trail. Lynn is an artist in many mediums. While living in California, she was a mural painter. She is an experienced sculptor and photographer. At the present, her shop features her paintings…fantastic images with a theme of women and wine.

The Pendleton Art Center was not scheduled to open until Wednesday. I told Lynn how much I regretted not being able to visit the center. The last time I visited Rising Sun, the center was not open either. Lynn gave a big smile, and opened a sliding glass door that connected her shop to the art center. She explained some of the artist’s backgrounds, and showed me Olinka Broadfoot’s exhibit in the main gallery. 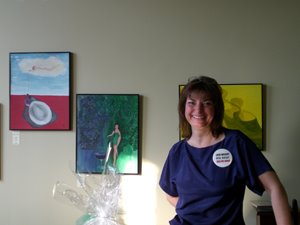 After my morning birdbath in the town’s public restroom, I mounted my bicycle and began the journey toward Madison, IN. My legs were stiff from the previous day’s peddling, but after a while, i had a momentum that carried me the next 50 miles to Madison. The river provided rich soil for the farms and fields along the Ohio. While traveling, I received a few telephone calls from concerned friends and family, and walked while talking. My dad suggested that I stop at the closest bike shop to have the air in my tires checked. I used a racing bike with very small tires…I try and keep the tire pressure up to 100 pounds, which is not possible to maintain with

the emergency pump that I carry on my bike. 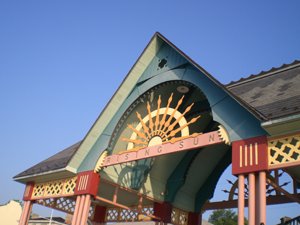 When I arrived in Madison, I stopped at a bike shop located on the main street. The mechanics checked my tire pressure, and I bought an adapter so that I could use regular (schrader) pumps on my bike’s tires. The weather was very humid, and my legs were tired. When I arrived in Madison, I was glad to be at the turnaround part of my journey. It was about 4pm and the afternoon sun did not give many opportunities to take photographs. I took a single photo of me in front of madison’s bridge, then beg

an the trip back home.

Madison’s bridge to Kentucky is not bicycle friendly. It is wide enough for cars only, so I had to stop traffic while i crossed the river.

It was great to be back in Kentucky, and I was excited to get back home. I was hot, and my legs were feeling a bit sore. I made the mistake of passing grocery stores, thinking I would get a little more distance before stopping for dinner. Time passed, and i reached a point where I was starving, and there was no place to find food, or camp.
The sun began to set, and I began to get frantic, then I entered a small town with a small grocery store complete with bananas, yoghurt, and gatorade. I gratefully bought my dinner, then crawled into the woods for the night. 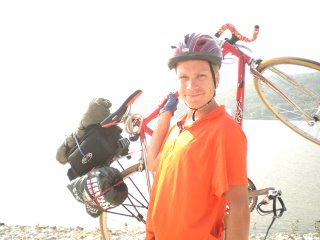 This week, I decided to take a cycling trip from Augusta,KY to Madison,IN. After having breakfast, I left Augusta very nervous. I had never cycled such a distance, and I had never camped alone in the woods. After traveling about 10 miles, I realized that I had forgotten my bicycle lock. Rather than spend unnecessary money further down the road, I turned around and passed the nasty barking houndog, climbed the giant 1 1/2 mile hill, and retrieved the bicycle lock. I reassured myself that the goal of the trip was to learn about bicycle touring…not to cover a set distance in a set time.

About an hour after leaving Augusta for the second time, I was passed by a group of serious bikers. There were probably close to twenty in the group. All dressed in bright colored biker attire. They passed me with such a momentum, I felt like a child on a tricycle. The group was drafting off each other, and the only extra weight they carried was their water bottle, however, they triggered my competitive streak, and I began pushing myself harder…Hoping to keep up with their pace. After about 30 minutes hard cycling, I was relieved to see the last biker in the group take a different course. 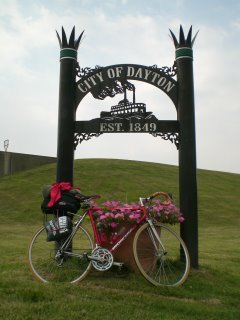 I stopped at a recreation park outside mentor, KY. it had a series of bike trails that circled a cluster of baseball/soccer/football fields. I refilled my water bottles, and called my parents to let them know how the trip was going so far. I learned from my father, an experienced biker, that trying to pace with the group was a bad idea or a touring biker. He explained that I would be peddling all day (for days) and it is more important to 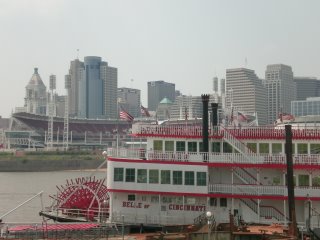 maintain a comfortable pace than try to achieve any speed goals.

I began to enter Cincinnati metro area. Being Sunday, the traffic was not heavy. While approaching the cluster of bridges that connect Kentucky with Cincinnati, I was surprised at how quickly I covered such a distance. I now know that I can ride my bike into Cincinnati in about 3 hours. I kept my equipment very light with the mindset that most of what I need will be available while traveling. I made my first food stop at a Taco Bell, where I refueled with burritos and quesidillas. I followed the river along rt 8 out of the city until I reached the Anderson ferry. The ferry made me reminisce about our ferry in Augusta that crosses the Ohio…It seemed like a world away, even though I had only been on the road for a few hours.

On the Ohio side, I traveled along hwy 50. It was not as bicycle friendly as Kentucky’s route 8. Although 50 was a four lane, it was much busier than kentucky’s river road. It also lacked the “share the road” signs that provided a sense of safety. I peddled west, passing a series of factories, until I reached a grocery store, where I bought 3 bananas and 3 cups of yogurt. 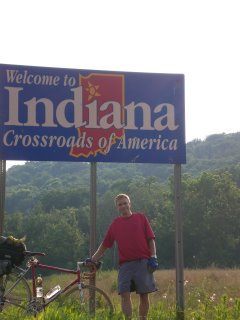 Later that day, I crossed the state line, entering Indiana. At that point, I decided that I wanted to stop a few miles before Rising Sun, IN. I followed the signs for the Ohio River’s scenic trail. It took me through old Lawenceburg, a town with some charming architecture, but dwarfed by a sprawling casino boat and factory industry. You would think that a city with so many revenue generating businesses would be able to afford to maintain their roads. Lawreneburg had the worst conditions for a bicycle…lots bumps, glass and potholes.

After traveling through Aurora, IN, I began to look for places to sleep for the night. I had my eyes peeled for something wooded, away from from a private residence, and without a No Tresspassing post. After finding the spot, I carried my bike down a small hill and set up my Hennessey Hammock, a combination tent/hammock. It was hard to make myself comfortable, because it was a hot day, and a humid night. I fell asleep listening to one of my favorite podcasts, woken by the snort of a deer. The woods were pitch black, speckled with firefly lights. A dog barked at me, as i drifted in and out of sleep. 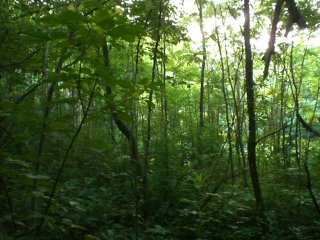 You can visit Ken every Final Friday of the month at studio 400 at the Pendleton Art Center in downtown Cincinnati. He can also be found picnicking near his home in the Historic Village of Old Washington, KY.